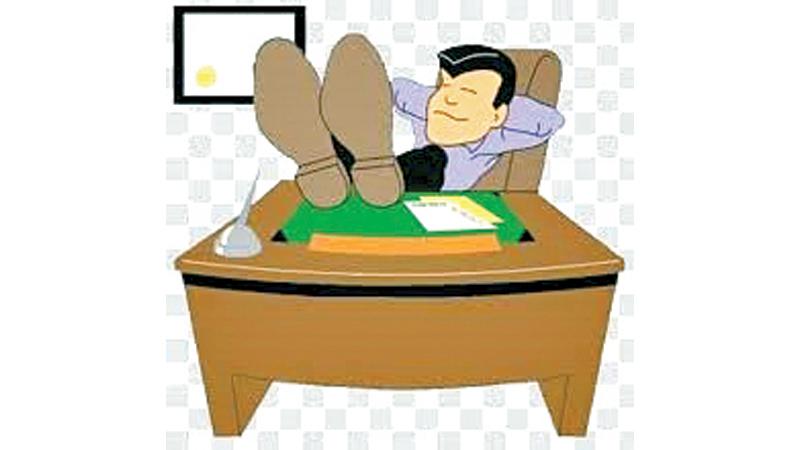 The hot topic in the country is the restructuring of loss-making state enterprises. Although all citizens (with the exception of civil servants) know that the efficiency of the public sector is well below standards, the Sri Lankan civil service is not only inefficient, but also corrupt and very deficit, and by therefore brutally wastes public resources.

Although recent statements by President Wickremesinghe and the Secretary of the Ministry of Public Administration about civil servants have come under heavy criticism from civil servants themselves, the bitter truth is that they are not working to their full potential.

Despite the time and again efforts of lawmakers to introduce rules and regulations, even a fraction of the overall efficiency has not changed over the past decades. The entire civil service is totally disjointed, the staff are untrained and their general attitude is anti-social. The moral and ethical standards of public service remain unchanged despite the pervasive negative public opinion.

Sri Lanka is perhaps the only country where state university graduates pass out after a free education of around seventeen years or more and apply for government jobs.

They categorize them as intellectuals, yet despite the realization that the civil service is overcrowded and unbearably expensive for taxpayers, they pressure governments for civil service jobs.

According to the opinion of many rational thinkers, the main reason for the enthusiasm of graduates for government jobs is the feeling of ease of functionality in such a job. Even those in lucrative private sector jobs continue to apply for public service despite rewarding private sector opportunities. This phenomenon itself reflects the level of efficiency of the country’s civil service.

There is no doubt that a country needs a well-functioning public service sector. The civil service of any country provides essential services to people in a specific jurisdiction. These services are provided either directly by the government or by designated semi-governmental institutions through government-established public corporations or enterprises.

Therefore, the importance of civil servants cannot be overstated. By all means, the public service and its workforce are of paramount importance to the functioning of the country. They are responsible for maintaining the country’s infrastructure, protecting the environment, strengthening the economy, ensuring access to education, etc.

Any average person does not dispute this factor. Yet the complaint of nearly every ordinary citizen is that, despite the important responsibilities outlined above, the vast majority of the public service underperforms and grossly neglects its duties.

No one this writer has spoken to recently on the subject has expressed a positive opinion about the overall performance of any of the public offices he has visited, including this writer, everyone had a bad experience regardless the task they went to accomplish.

In fairness, sometimes there are places where public officials provide services to people quickly and cordially. In this author’s opinion, based on experience, the office of the medical officer of health is one of the few government offices that provides good service to the public.

Recently, charges and counter-charges have been leveled against each other in Parliament by government and opposition politicians for increasing the number of civil servants to intolerable levels from one million to 1.7 million over the past 15 years.

However, the general public is aware that, like state enterprises, the civil service is also a breeding ground for political henchmen. During a recent television appearance, the secretary of the Ministry of Public Administration revealed that only minor positions are filled without competition.

Even this information does not seem genuine as this writer has come across even middle and senior level officials who exist in the joined service without competition but merely political influence.

There is ample evidence that even minor civil service jobs have historically been created on the whims and whims of politicians. Although precise numbers are not available to the public, it is no secret that such “small employees” are flooded into the public sector, possibly numbering in the millions.

The vast majority of these workers have been appointed by politicians, especially ministers, in every government over the past decades, from their respective constituencies. The only intention of these dubious politicians is to protect their electoral base.

The current inefficiency of the civil service in Sri Lanka is due to many reasons. The first and main reasons are the resistance to any reform, the new operating system and the lack of empathy of most public sector workers.

Whenever there is an attempt to change any of these, unions invariably use heavy-handed tactics to threaten the government in power.

Their basic strategy is to mislead the general public into believing that the government is trying something suspicious. If the government does not respond to their demands, they enter into demonstrations, strikes or any other type of campaign. The irony is that when there is resistance action from the government, they come together, regardless of all kinds of political differences.

Another important reason for inefficiency in the public sector is the non-availability of leadership efforts to perform effectively to maximize results. Most often, the hierarchical framework is such that the leader himself came to a higher position in the service with a long period of service.

In such a scenario, even the leaders have no motivation to drive their subordinates to performance and productivity. They invariably avoid putting pressure on lower-ranking staff to perform better. In public sector institutions, there are no owners to direct the workforce, and the sense of ownership or responsibility is minimal. They also have no non-performance worries as they have guaranteed salaries no matter what happens to the country’s economy.

As there is no risk of bankruptcy, as in the private sector, where the threat of job losses exists in such a situation. For example, the entire public sector received full salaries during the period of Covid-19 and the ensuing financial crisis, whether they worked or stayed at home.

Unlike the private sector, although public service inputs can be quantified, there is no mechanism to measure outputs. This fact relieves the pressure of accountability on officials. In some cases, even though they have to submit reports periodically, these are just documents whose accuracy or authenticity are usually never verified.

There is an urgent need in the country for urgent public sector reforms at this crucial time in Sri Lanka’s history. As attempted in 1997, evaluations of the performance and aptitude of civil servants linked to annual increases and promotions must be carried out without delay, even if it will be difficult to convince them. To implement such programs, very strong political leadership is needed, with no expectation of future votes.

The current government is heavily burdened, more than any other government in the past, by a severe economic crisis, shortage of foreign exchange, unemployment, loss of existing jobs, reduction of poverty and elimination of corruption. Therefore, civil servants must be convinced that the country needs them more than ever and that their commitment is necessary to recover.

EVENT: Learn about WA’s mental health system and how you can help in a crisis

BCR authorities should use all available resources to control dengue fever