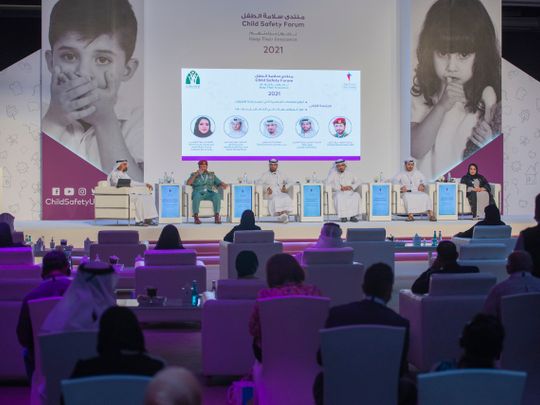 Sharjah: Most cases involving children are resolved amicably in Sharjah, the Sharjah Police Commander-in-Chief told Gulf News on the sidelines of the Sharjah Child Safety Forum on Wednesday.

The second edition of the Child Safety Forum, organized by the Department of Child Safety (CSD), affiliated with the Supreme Council for Family Affairs of Sharjah (SCFA), opened on Wednesday morning with Her Highness Sheikha Jawaher bint Mohammed Al Qasimi, President of SCFA, affirming that “the family is the compass that guides the development path of Sharjah and the driving force that has led us to provide the best social services with the child at the heart of our programs and initiatives”.
In a statement marking the opening of the forum, Sheikha Jawaher added: “Childhood is a time of innocence; it contains formative years of our lives in which our personalities are shaped. For this reason, His Highness Dr Sheikh Sultan bin Muhammad Al Qasimi, member of the Supreme Council and Sovereign of Sharjah, has never hesitated to launch innovative projects designed to promote the psychological, physical and intellectual well-being of children, and in turn, strengthen Sharjah’s appeal as a safe and nurturing refuge for children, where they enjoy their rights, express themselves and realize their full potential.

The police chief was a speaker at the forum in a session on the types of abuse suffered by children and how the police, prosecution and relevant authorities deal with it.

Major General Al Shamsi said the safety of children in Sharjah is a top priority for the police, as directed by His Highness Dr Sheikh Sultan bin Muhammad Al Qasimi, member of the Supreme Council and Ruler of Sharjah.

During the session, he stressed the importance of the role of the media in raising awareness of the community through positive examples and not giving a negative image of children.

“I ask the media to be more positive in their interactions with everyone, not just children. We have to be very careful in the way we project the children’s reports and stories on media platforms, as the child’s family could be deeply affected, ”said Major General Al Shamsi.

He also suggested adding sports activities to each neighborhood park to keep children away from cell phones and their impact.

“The law is essential”

Dr Al Hammadi said that child protection laws in the UAE have been in place since the 1970s and are stronger than ever with the introduction of the Wadeema Law (now known as the children’s rights). “Of course our country offers people the opportunity to prosecute offenders, but we need to be aware and committed to these laws and follow them because the psychological effects of child abuse, even harassment, are sometimes irreversible. This is why respect for the law is essential, ”he added.

Dr Hammadi told Gulf News that the prosecution has registered a number of cases under the Wadeema Law, some of which have been dismissed while others have been referred to the courts. He called on the community to respect children and treat them well, otherwise they would face legal action.

Risks of being online

He also urged parents to monitor what their children are doing on the internet and what kind of material they are accessing. “Beware of electronic games because they are a major cause leading to sexual assault,” he warned.

Police tracked down the owner of the ad and arrested him, who lived in a house 300 km from the boy’s house. Police investigations revealed that the owner of the Instagram account was only targeting specific age groups for sexual purposes.

The 800700 child abuse helpline is a lifeline for many children in Sharjah. Operating 24 hours a day, seven days a week, professional crisis counselors through interpreters provide immediate assistance to those in need, in Arabic and English.

The hotline number has received 1,623 complaints since the start of this year, said Ahmed Al Mail, director of the social services department in Sharjah. Most of these cases were related to neglect, physical abuse, violence, cyber-blackmail, bullying and misconduct. They have been reported by parents, caregivers, teachers or others through the 800700 helpline.

He said the department recently launched the “Ishraqa” clinic, which has a team of social workers and psychologists to provide rehabilitation, social and psychological support to victims and those who have previously been exposed to such. abuse.

The clinic also conducts awareness programs for parents to ensure they maintain a safe home environment for the abused child to prevent such incidents from happening again.

Moza Salem Alshoomi said educational institutions play a vital role in reporting child abuse, adding that by next year a new program will be launched in schools to encourage children to stand up for themselves and to report any type of abuse.

The one-day forum brought together around 100 senior local and federal officials from the UAE and global experts to strengthen child protection and tackle child abuse, while raising awareness of types abuse and the means to remedy it.

Speakers underscored the need to shift from individual responsibility to creating an environment where child protection is a collective responsibility fulfilled by parents, government, legislators and the media.

The changing face of abuse

CSD Director Hanadi Saleh Al Yafei told the forum: “Child abuse is a complex social problem on many levels and the discussions held at the forum, under the theme ‘Keep their innocence’, address the physical impact, psychological and social abuse of children. “

She added: “Protecting children from abuse is a responsibility shared by parents, the community and relevant official authorities. A shift in modern lifestyles with the increasing evolution towards an online landscape has led to the emergence of new types of abuse.

“We need to step up our efforts to identify and better understand online child exploitation in order to protect our children from its dangers. The forum aims to keep children safe, both online and offline, and will serve as a platform to raise awareness, especially among children and young people, about all forms of harm, neglect and abuse. .

The clinic also conducts awareness programs for parents to ensure they maintain a safe home environment for the abused child to prevent such incidents from happening again.

How to seek help in the UAE

Report child abuse to the Home Office (MoI) through their hotline number 116111 or through the MoI Child Protection Center website and the “Hemayati” (Protect Me) app ( available on Android and iOS).

Demonstration against an unfinished school: the ministry reacts | Additional news