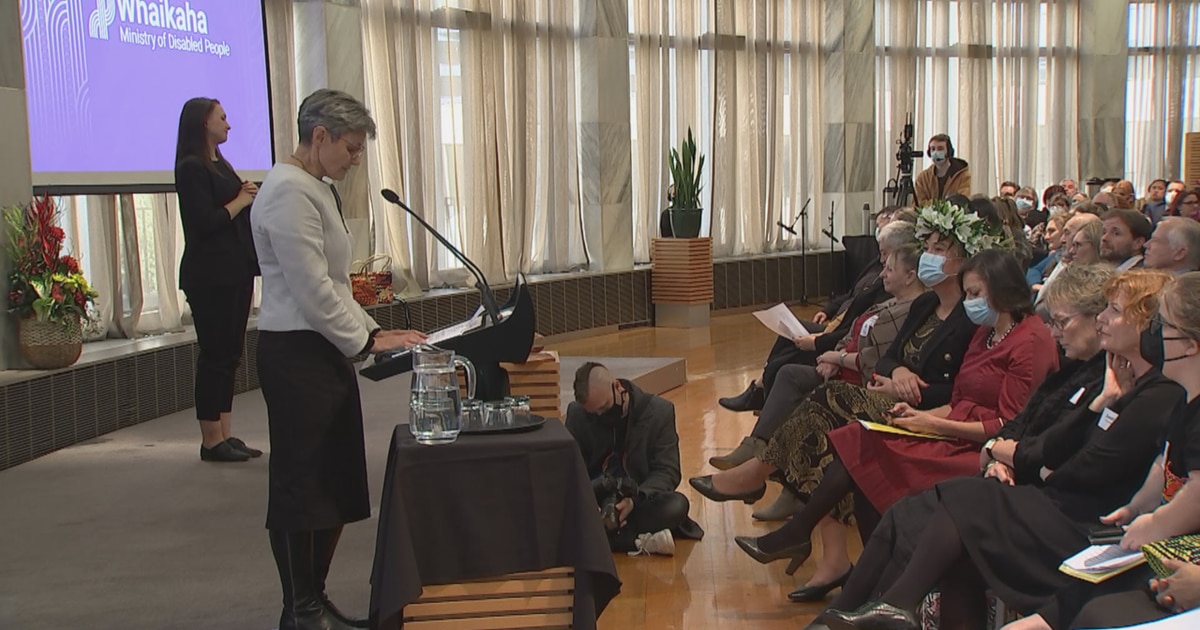 Over a million Kiwis living with disabilities now officially have their own ministry.

The new government department was launched on Friday, starting with an event in parliament featuring a moving performance of kapa haka by a group of people with intellectual disabilities.

The new ministry was named Whaikaha – Ministry for People with Disabilities.

It will be the first ministry to have a name in New Zealand Sign Language, but the government told 1News the sign is not yet finalised.

The preferred person to lead the ministry is also not yet ready, with an interim leader appointed.

Geraldine Wood is the temporary appointee, and it’s unclear how long she will remain at the helm.

READ MORE: New disability ministry to launch on Friday – is it ready?

The Public Service Commission has conducted an independent recruitment process for the permanent post and says its first choice for the post of chief executive is a person with a disability.

They will be the first disabled Kiwi to serve as chief executive of the ministry, which advocates say is “momental” and “unprecedented.”

The Public Service Commission indicates that there is a delay in finalizing the appointment due to the candidate’s personal circumstances.

Outgoing disability minister Carmel Sepuloni said: ‘It was never that everything was going to be in place on day one.

But she is adamant that the ministry is still ready to go.

“The disability community has been waiting for this moment for decades,” she said.

This is an important moment for the new Disability Minister, Poto Williams, to take over.

Asked what comes next, Williams said: “From this moment, we will fully involve the community to establish what are the next steps, the priorities.”

Wood could not say how long she would serve as general manager.

“EWe hope that the preferred candidate will pass the process in a short period of time.”

In the meantime, she believes she can get the ball rolling.

She has the support of the ministry’s facility governance group, made up of Kiwis with lived experience with disability.

“I think I can come to nurturing the people within the ministry…I can start supporting the connection of that and how we reconnect to the broader disability community.”

As of Friday, disability funding which falls under the Department of Health falls under the new department, and those who depend on the services are reassured that all will continue as usual.

“The department will lead and coordinate disability policy across government, including improving outcomes for people with disabilities in areas such as employment, education, health and wellbeing” , Williams said.

Called the “facilitating good lives” approach, it has already been successful in pilot programs in Waikato, Canterbury and the inner city.

It is intended to give people with disabilities more choice and control, including over funding, to enable them to live a good life.

Hopes for the next generation

The mum of eight-year-old Tallulah Mackay, who lives in Twizel, South Canterbury, hopes the new ministry will lead to an easier future for her blind daughter.

“I hope she doesn’t have to fight as hard in the future for what we are fighting for her to get now.” said Jess Mackay.

Their family struggles to get support in their rural town, the person responsible for teaching them how to use their cane in Auckland.

“She plans to come once a year, so it’s just not enough for a kid her age to learn something physical.

“We struggle with conversations about funding and bringing people physically here to help Tallulah with her education,” Mackay said.

She believes Whaikaha has the ability to make a real difference, but they need to listen to the community.

“It’s just a matter of whether it’s done right.”

“There is a long way to go in New Zealand to make a difference to the life outcomes of people with disabilities and in particular Tāngata whaikaha Māori,” Tesoriero said.

Tāngata Whaikaha Māori and Ministry Establishment Group member Peter Allen said, “‘There’s an enormous amount of mahi that we need to do now because we want a ministry that is going to reflect our people.’