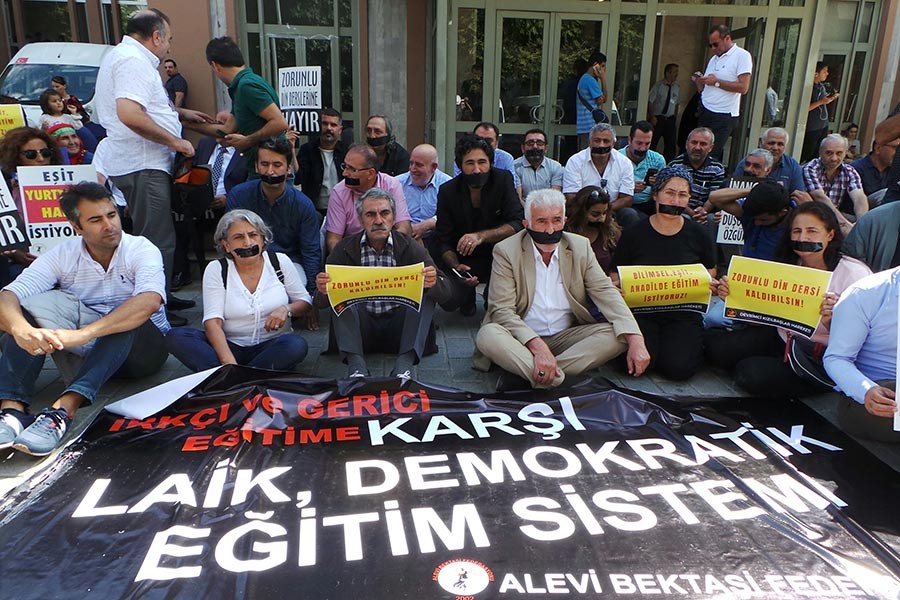 Alevi organizations staged protests in several provinces of Turkey on Sunday demanding that compulsory religious classes in schools be abolished and that cemevis, Alevi places of worship, be officially recognized by the state, the Evrensel daily reported.

In a statement read at a protest in Istanbul, Alevi organizations said the government was increasingly discriminating against Alevi communities. They called on the government to be democratic and to guarantee freedom, justice and equality.

Incorporating Shia, Sufi, Sunni and local traditions, Alevism is a strain of Islam that emerged in the Middle Ages. It is estimated that Alevis constitute between one tenth and one fifth of the Turkish population.

Turkey has long denied Alevi demands for state recognition, and cemevis are not officially recognized by the state.

The organizations said religion classes were made compulsory with the 1982 Constitution, which was drafted after a military coup on September 12, 1980 and ratified under military rule. The constitution is known for its restrictive approach to human rights; therefore, the organizations said it did not conform to democratic principles or societal demands.

Compulsory religion classes have been criticized for only covering Sunni Islam and not giving way to other religious beliefs, including Alevism. In addition, these courses are offered to children from the age of four. Families think it’s too young to understand abstract phenomena such as ‘God’, ‘angels’ and ‘prophets’ and for children it gives the impression that Islam is the only existing religion.

Alevi leaders have repeatedly expressed concern that the situation of Turkey’s Alevi population is becoming increasingly precarious as the government of President Recep Tayyip Erdoğan has failed to deliver on its promise to grant them more rights to allow the free practice of their beliefs and imposed its own version of Islam on various segments of society.

The Turkish government launched an initiative in 2009 called “Alevi Opening” aimed at achieving a better understanding of Alevi issues through a series of workshops and adopting reforms based on this understanding. Yet the government has not acted on the recommendations of a report based on the results of the workshops and has taken only token action. Promises such as official recognition of cemevis and changing the law regarding compulsory religious education courses have not been kept.

Additionally, hate crimes against Alevi communities are common. Cemevis have occasionally been vandalized, with curses and other insulting words put on their walls.

Take a second to support the Stockholm Center for Freedom on Patreon!

ACS calls for increased focus on the tech sector